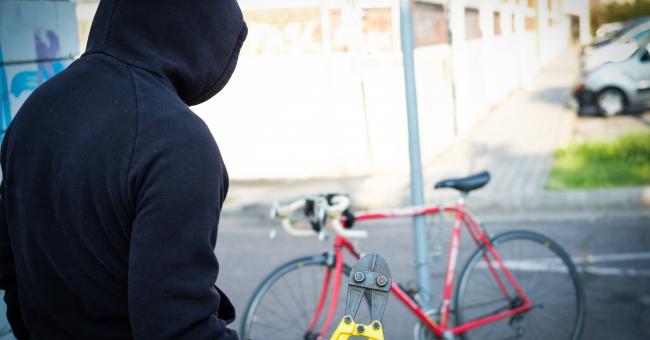 Over the past year, bicycles have become an increasingly valuable commodity. In cities large and small, bicycle thieves have become well-equipped and organized, leading to bicycle theft now reaching epidemic proportions. Unfortunately, bike theft is also one of the least frequently resolved crimes.

Understanding where and how bike thefts happen will make you a more aware bicycle owner and hopefully keep your bike out of thief’s hands for the foreseeable future.

Left unattended in a convenient place

How does theft happen so easily? Three words: battery powered tools. There is simply no lock that is immune to an attack by a battery powered grinder with a diamond blade. A diamond blade will slice through even the thickest cable lock, and chain locks won’t take much longer. Some better equipped thieves are even using impact guns that are designed to drive nails into concrete; with one blast by an impact gun, the lock simply falls apart! 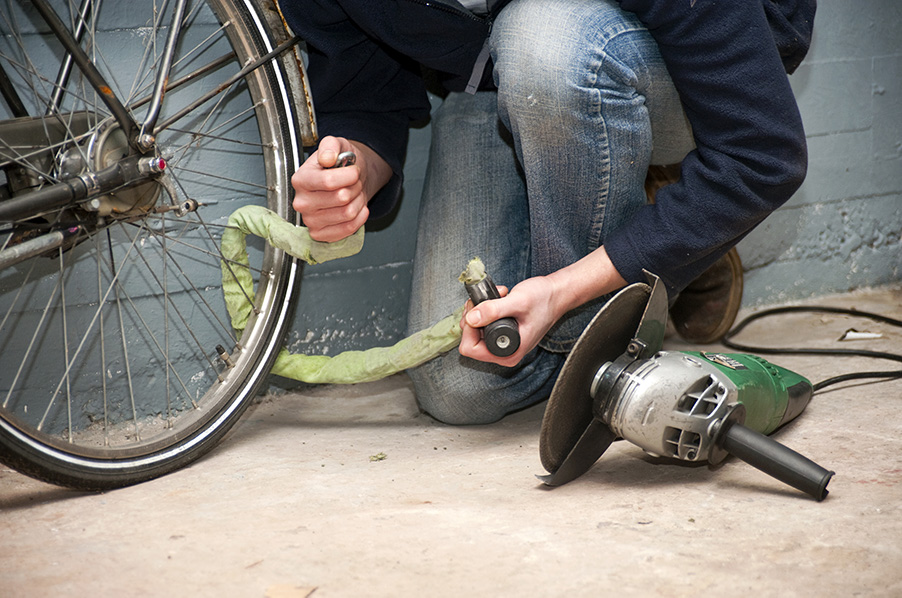 Most successful thieves recognize target-rich environments, so the moment you leave your bicycle unattended, it immediately becomes a theft target. Since thieves don’t discriminate based on location, there’s really no “safe” place to leave a bike, but many people are surprised to learn that some of their most common errand stops happen to double as prime bike theft locations. Some of the most popular theft spots include supermarkets, health clubs, train stations, libraries, work locations, restaurants, hotels, schools, and hospitals. No matter where the bike is left unattended, no one but the bike owner has any interest in preventing a theft - and in some cities that even includes the police.

There is no solution that is 100% effective against bicycle theft, but the risk can be mitigated by securing the bike with several of the highest quality locks available. In a recent comparison of lock strength performed by The Best Bike Lock, it was found that when comparing Abus locks to other major lock brands of the same type and style, Abus lock was considerably heavier than the competitor locks. Lock’s weight is an indication of metal density, and density is an indication of strength. In the essay “Confessions of a Bike Thief,” the writer mentioned that he would pass up a bike secured by an Abus lock to steal a bike secured by the competition’s lock.

Many thefts happen when an unsuspecting traveler leaves a bike on a car rack or inside their locked motor vehicle. Bikes get stolen off cars when parked for “just a few minutes” in a grocery store parking lot or overnight at a hotel location alike. Thefts happen at everyday stops such as gas stations, convenience stores, and fast food restaurants by criminals who recognized a high value bike. Some bike bandits are so stealthy that they manage to get away with their heists right in front of people! Recently, a team of bike thieves in Denver was staking out the parking lot at a major sporting goods store and before anyone noticed, a series of bikes were stolen from car racks. The thieves were never caught.

If you plan on leaving your bike on a car rack or in the bed of your truck, make sure to secure it with a heavy duty chain. If your rack has a built-in cable lock, you’re welcome to use it, but still double up with a heavy lock. Park your vehicle in a way that is always visible from inside the store or restaurant you’re going to. 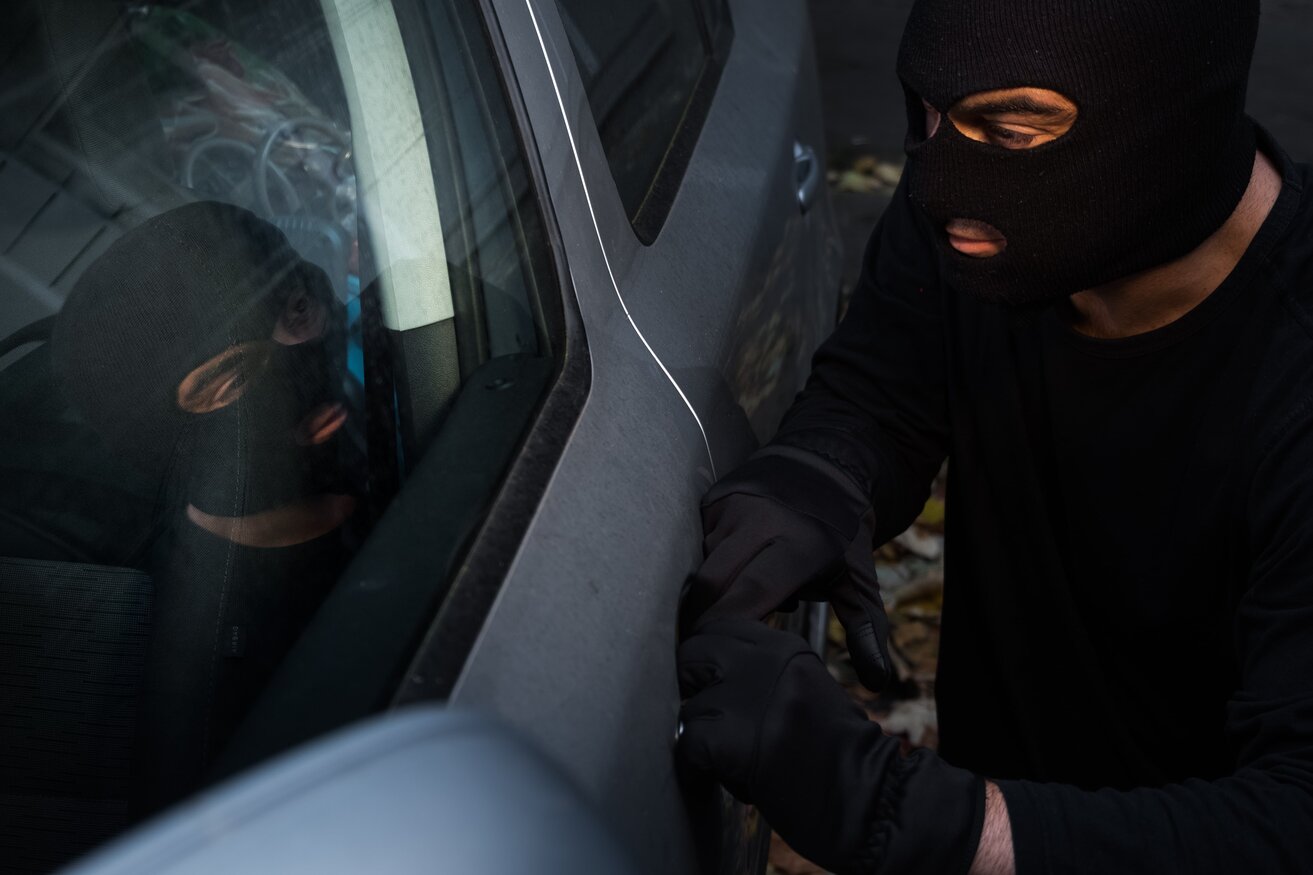 More bikes are stolen from garages than any other location. Even a closed garage door no longer presents an obstacle to an educated thief. While modern garage door openers are protected by rolling codes, the older models can easily be hacked, and in the absence of code breaching technology, thieves are adept at prying the top of a garage door open enough to get the hold of the emergency rope that allows the garage door to be released and opened manually.

If you store your bikes in a garage, especially if you have kiddos who are not yet disciplined enough to keep the door closed at all times, it is prudent to lock the bikes to something attached to the garage floor or wall with a heavy chain and lock. If you don’t have anything sturdy to secure your bike to, consider installing a floor anchor into your garage floor. 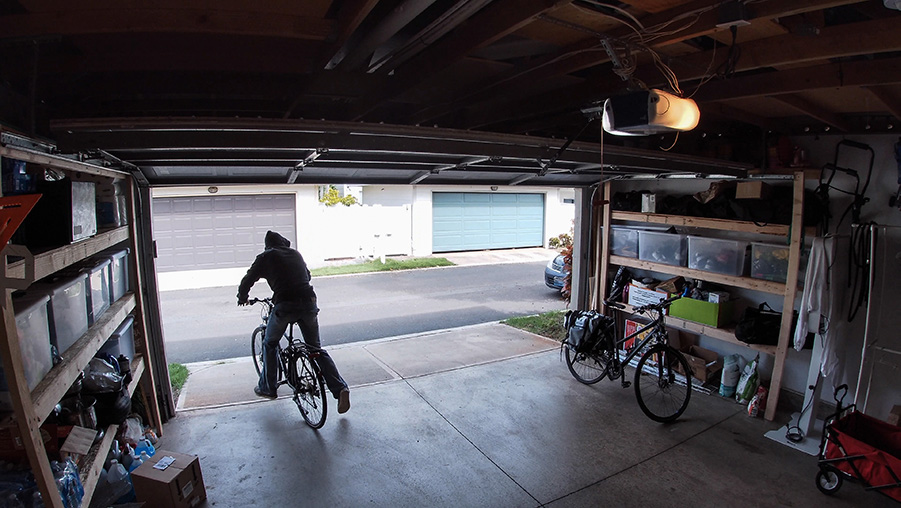 Many condo and apartment complexes do not allow bicycles to be brought into the bicycle owner’s apartment, requiring that they be stored inside a locked bicycle cage in the parking garage—where it is easily visible to everyone entering or departing the garage. This kind of open visibility of how bikes are secured offers valuable information that can help a bike burglar break in. Because many residents (past and present) have access to the bike cage, bicycle owners need to take precautions as if the cage door does not exist. To avoid bike cage theft, it is recommended that the bike be secured inside the cage to an immovable object such as a pillar or a pipe. Use the heaviest chain and lock available and never rely on a cable lock to secure your bike. If there are no security cameras placed around the cage, it may very well be worth raising the issue to the complex management to have one installed.

Finally, if you’re a Strava user, go ahead and set up privacy zone to prevent advertising the location of their bike to the world.

If you chose to store your bicycle on a balcony and live on the first or second floor, it is suggested that you reconsider. If you’re left with no other option, at least invest in heavy-duty security. Bicycles left unlocked and stored on a building balcony are only one pickup truck with a ladder away from theft. While many people don’t realize it, the second floor balcony is easily accessed from ground level with a 10’ ladder and the third floor balcony can be breached with the same ladder extending from the back of a truck. In other words, bicycles stored on balconies found on the first through third levels are automatically more susceptible to theft than those at higher levels

No matter where, bicycles left unattended and lightly locked or unlocked are bound to be stolen. If a bicycle is kept in a backyard, even if it can’t be seen from the street, sooner or later it will stop being a secret, and eventually it will be stolen. Bicycles stored in a shed on the owner’s property should either be locked to the shed itself or be stored in a shed whose door remains impenetrably locked at all times. 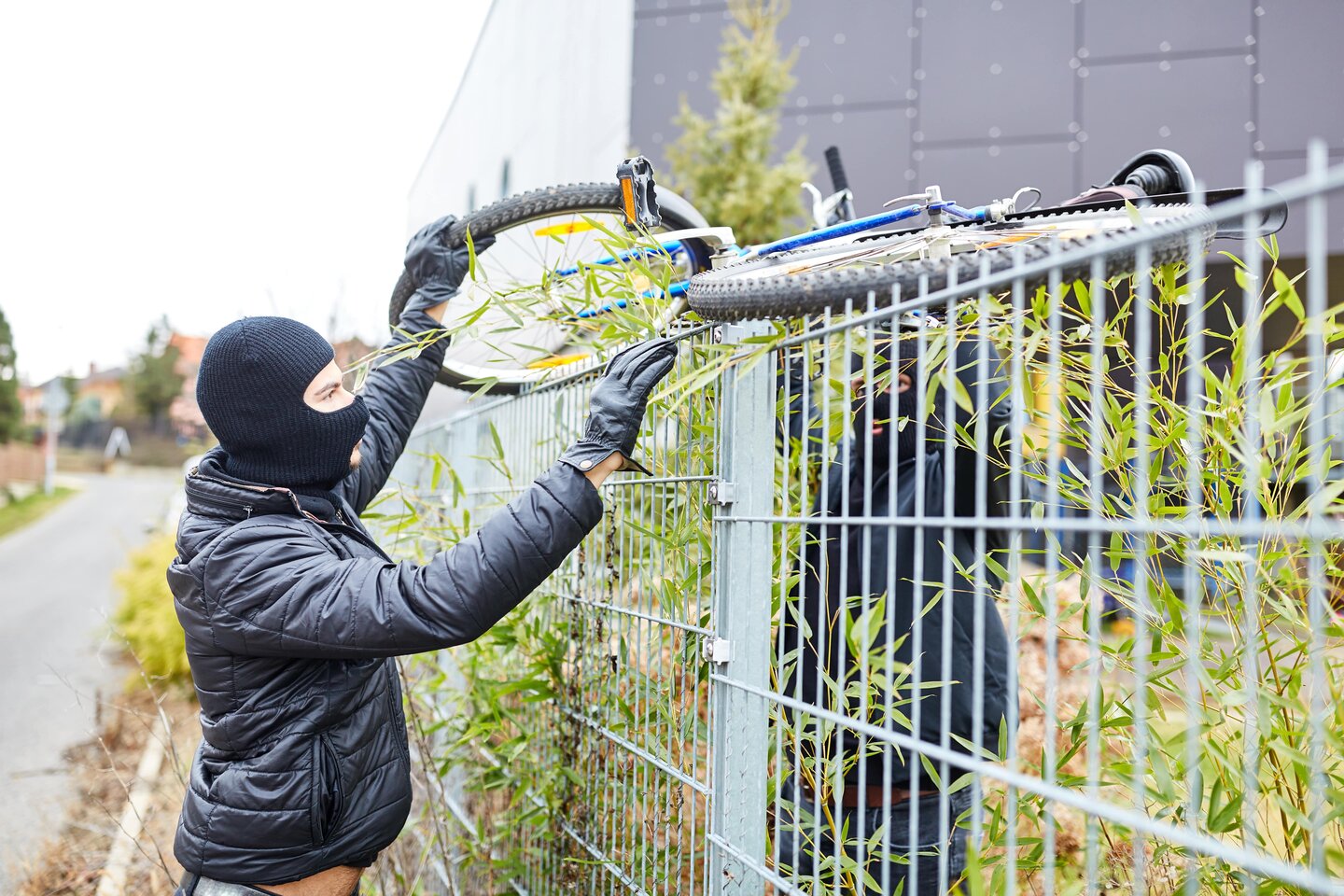 Bicycle commuters present the perfect situation for a bicycle thief to recognize a valuable bike that is left secured in the same location during working hours that often extend into hours after sunset. Once again, this is a situation where a heavy chain and lock is all that separates the bicycle owner from pedaling home and riding the bus. Bicycles left secured outside between sunset and sunrise are the most likely to be stolen.

In some cities, securing a bicycle to a city sign post, a mailbox, or parking meter violates a city code, allowing the city the right to cut the bike free and impound it, or worse, leave it unsecured on the street. Always be aware of city ordinances regarding the use of utility poles, sign posts, and parking meters within the city to avoid finding yourself in this situation.

Apart from total bicycle theft is theft of bicycle components and accessories, including batteries, racks, lights, wheels, seats and anything else that the thief can dislodge from the bike that has value on the street. To protect yourself from this type of theft, there are unique fasteners that require a specific and unique tool to remove most bike parts. While it is normal to see a bicycle locked to a rack by the frame, the wheels are often left unlocked and easily stolen. The more locks securing a bicycle, the less likely that it will be stolen.

GPS and other emerging technologies

Other than locks, there is also emerging GPS and cellular technology to track missing bikes, and motion sensor alarms to alert the owner if the bike is moved or the lock is tampered with. While exciting on paper, they have limited applications as bike recovery devices as they require a cell phone connectivity (via a SIM card) and their battery life is quite short, measuring in days rather than months or years.

Airtag is one of Apple’s most recent gadgets and was designed with the intention of making daily life a bit easier. More specifically, it’s a little round disc that can be attached to nearly anything—keys, phones, wallets, purses and bags—with the purpose of helping you locate your missing item. And while it wasn’t made with the intention of tracking down stolen or misplaced bikes, it certainly seems like it could be a viable option. Since it relies on low-power Bluetooth signal, it’s effective battery life is over a year. The tradeoff is that for it to be efficient, it needs to be within reach of iPhone devices, making it a viable option for primarily urban environments. 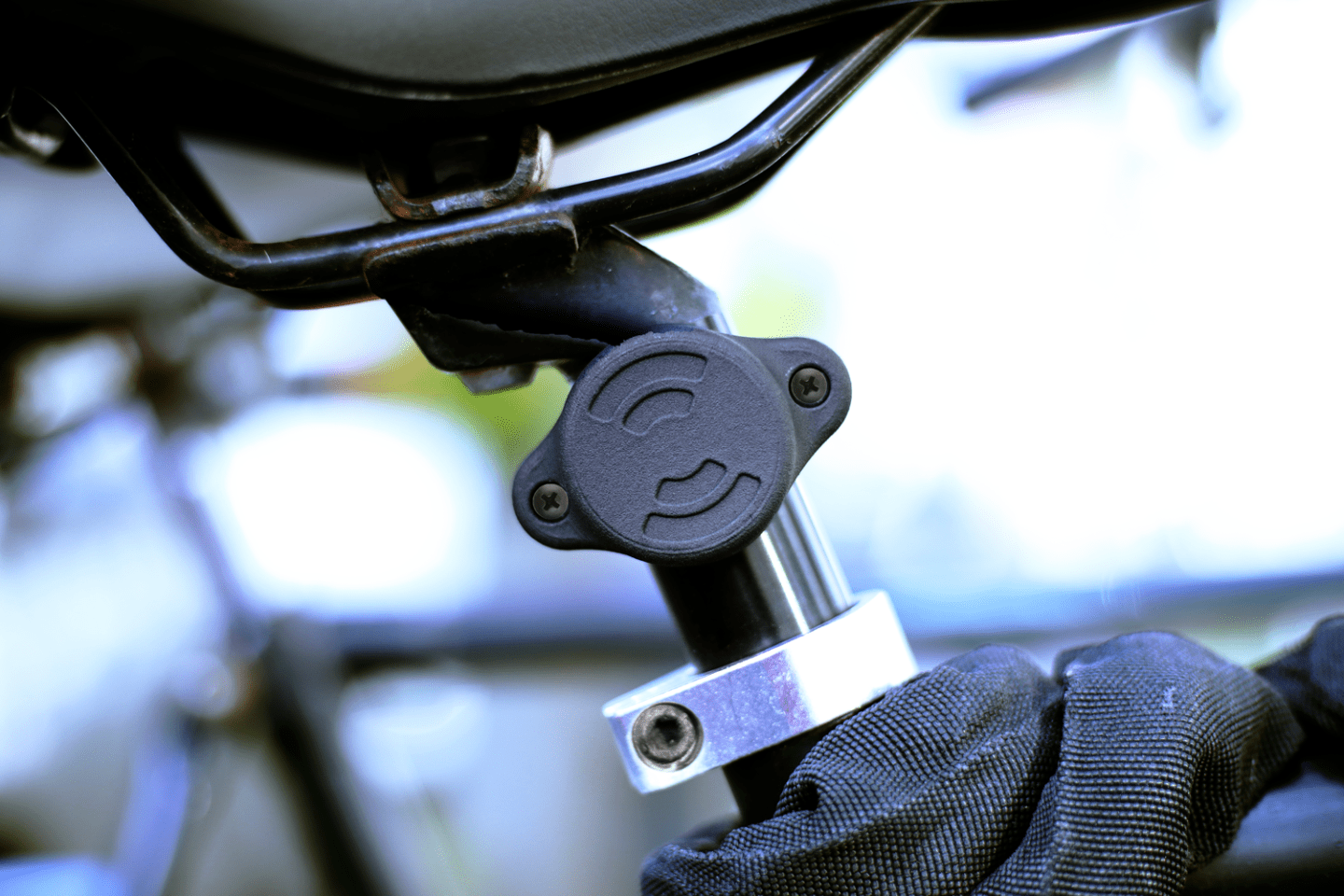 In fact, one bike shop went so far as to conduct a simulated bike theft to see just how well Airtag measures up for the job and found that under the right conditions, it certainly could help track down a missing bike. It’s worth noting that various factors were considered when they conducted the simulation, including geographic familiarity of the user and whether or not it’s able to receive sufficient Bluetooth signal.

If a stolen bike is located, it is advisable that you report the theft and location to the police. If the bike is recovered, you will likely be expected to show evidence of ownership. Because bicycle serial numbers can be easily removed, consider hiding something unique within the frame or handlebar as evidence of ownership. This evidence, along with photos and purchase receipts will allow the police to return the stolen bike to you.

In most police precincts, bicycle theft is not a high priority and is almost considered a victimless crime. If you have ever had a bike stolen, you know how violating it feels knowing that someone else is riding your bike.

When all the locks fail, that’s when a Velosurance bicycle insurance policy steps in to reimburse the bicycle owner with the full insured amount (less the chosen deductible $200 - $300 - $500) without any depreciation or argument.

Apart from bicycle insurance, it is recommended that the bicycle owner register the bike for free at Bike Index, a non-profit bicycle registry that works with law enforcement to recover stolen bikes.

A cable lock will not save your bicycle from theft 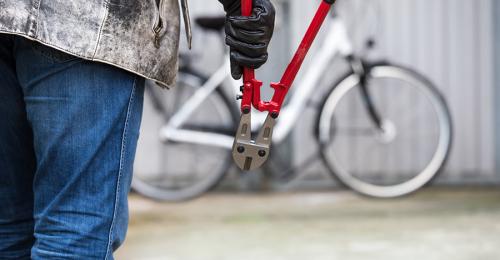 Securing your bike when leaving it unattended is a must-do if you expect it to be there when you return. If you commute by bike, it’s likely that you already own a bike lock. If you don’t, you should go purchase one as soon as you’re done reading...

How to not get your bicycle stolen 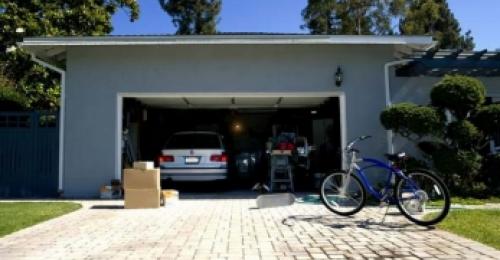 Stolen bicycles are almost never recovered and all it takes is a momentary lapse of concentration and bam, it’s gone! So how do you prevent bicycle theft? Where do bikes get stolen from? The # 1 place for bicycles to be stolen from is your home...